Facebook and Twitter as news sources. Love it or hate it, it’s the state of social media today. Everyone is sharing articles, retweeting links and circulating information (often without checking its accuracy).  A recent example of this is a news article posted on DailyCurrant.com: Man Responsible for Olympic Ring Mishap Found Dead In Sochi. There has been a lot of buzz around this year’s winter Olympics; from toxic water and unfinished hotel rooms to the extermination of stray dogs around Sochi (but that’s a whole different blog post probably about crisis communication!). With all this negative media attention, yet another article that details a ridiculous action surrounding the Olympics was quick to be believed by many.

A quick look at the Daily Currant’s ‘about’ section show that they’re a satirical site with the mission to “ridicule the timid ignorance which obstructs our progress, and promote intelligence.” Websites like this and The Onion take situations that are flooding the media and put hilariously false spins on them.  All too often, however, people scrolling through their social media sites are just reading headlines and sharing stories. After all, Facebook is the second most trusted online service.  So starts the vicious cycle of circulating false news. 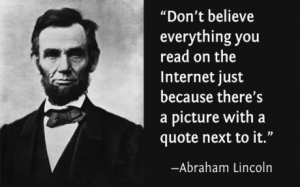 Moral of the story? Think before you share (or tweet). Is it really plausible that someone was so mad about the Olympic ring mess-up that they went out and committed murder? Probably not. Ridiculous things happen, that’s for sure, but it’s better to know the facts before you end up sharing false information. Sites like Snopes.com thankfully lend us a helping hand by getting to the bottom of many circulating rumors.  Keeping up with what’s going on in the news also helps to determine what’s true and what’s false. If other outlets aren’t sharing the same story, there’s probably a reason why. It’s our hope that social media users will start reading more into their news than just the headline…though the gullibility of others offers a good chuckle.

(This post was written by London Faust, PR intern and senior at Temple University.)