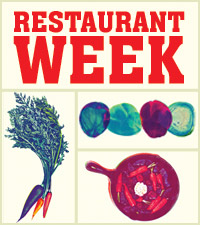 Is there a restaurant your friends have been raving about and you’ve wanted to try? There is no better time to schedule that reservation than during Center City District’s Winter Restaurant Week. The event kicks off on January 18th and runs Sunday through Friday until January 30th. With more than 120 participating restaurants ranging from Italian to Japanese and from seafood to steakhouses, there are plenty of options to explore. Participating restaurants offer guests a three-course dinner for only $35 and many restaurants also offer a three-course lunch option for $20.

For more than 10 years LevLane has worked with the Center City District to create vibrant and engaging creative work for many exciting Philadelphian events and initiatives including Dilworth Park, the Rothman Ice Rink at Dilworth Park and Center City District Sips. Throughout Center City, LevLane created and placed 64 brightly colored transit platform posters that reflect the livelihood of the city itself and the corresponding bus tails are sure to catch your eye as they pass by. Complimentary and unique web banners and online display ads can be seen online at Philly Style Magazine, Philly Weekly, or Philly.com.

Be sure to keep an eye out for all of the exciting creative work popping up across the city and make your Restaurant Week reservation today!

It was known only as barren, uninviting and often restricted.

After years of construction, Dilworth Park finally became a reality in September, attracting local workers, families and tourists to the transformed space with more improvements soon.

When the Center City District needed a partner to brand and promote Dilworth Park, it chose LevLane. Another cool project for a client we’ve loved for more than 10 years. Levlane has helped promote CCD’s Restaurant Week, Lunchtime Concert Series and other special events.

LevLane was excited to help Center City District position Dilworth Park as the new place to live, work and play in the city. It’s the stage for quiet gatherings for people from all sections of the city, for children to play in the fountains, and for entertainment and family fun. Dilworth also would be the new gateway for hordes of commuters using mass transit with the dramatically improved underground entrances to SEPTA’s subways and trolley lines.

New name, more action. CCD turned Dilworth Plaza from the inaccessible, multi-level mass of hard surfaces around City Hall into a fresh, green well-maintained public space with the new name, Dilworth Park. It features expanded public space with groves of trees and a lawn, a café operated by famed local chef/restauranteur Jose Garces, a programmable fountain that will become an ice skating rink in the wintertime, and space for plenty of benches and chairs for people to hang out.

LevLane’s objective was to develop a multimedia campaign that would reach local residents and workers, young professionals and families with young children, as well as public officials, civic leaders event planners and donors. We created fresh new identity for Dilworth Park to attract locals and encourage them to take advantage of the new cafe and events.

From lifeless in the past to lively today.  LevLane created new branding that positioned Dilworth Park as a place with energy, a place with planned entertainment and arts and cultural events year-round, like weekday happy hours with a DJ and movie nights under the stars.

“LevLane played a huge part in developing all of the signage and marketing for the park. It was a long road to get everything done, but another job well done by our team!” said Josh Lev, account director for CCD. “The branding and promotion of the city’s newest was a great opportunity to demonstrate our creative and media capabilities. We were happy to support a project that would be so visible and positive for Philadelphia.” Along with Josh and Stephania Marsico from account services, LevLane’s team included RJ Cassi, Evan Monsky, and Gabby Shirdan.

Center City District works year-round to ensure that Philadelphia’s downtown not only looks welcoming, but also is brighter, safer and more accessible. The $55 million Dilworth Park project was the fourth and most prominent city park to be re-developed and managed by CCD. All renovations are expected to be complete in November.

A sample of events at Dilworth Park: