When the Philadelphia and Harrisburg Taco Bell Associations wanted to bring the national message of the Taco Bell Foundation for Teens to a local level, they looked to LevLane to create a college workshop for the high school students in their market. We created a one-day workshop that provides 500 students with an opportunity to explore their higher education options and be eligible to win a scholarship, which is funded by local Taco Bell sales.

This year,  the national foundation and workshop were rebranded, which meant that our local workshop had to reflect the new look and feel of “Graduate For Mas“. Our interactive team rebuilt the previous Taco Bell Philly Workshop website from the ground up, incorporating the new elements of the campaign to our local workshop. 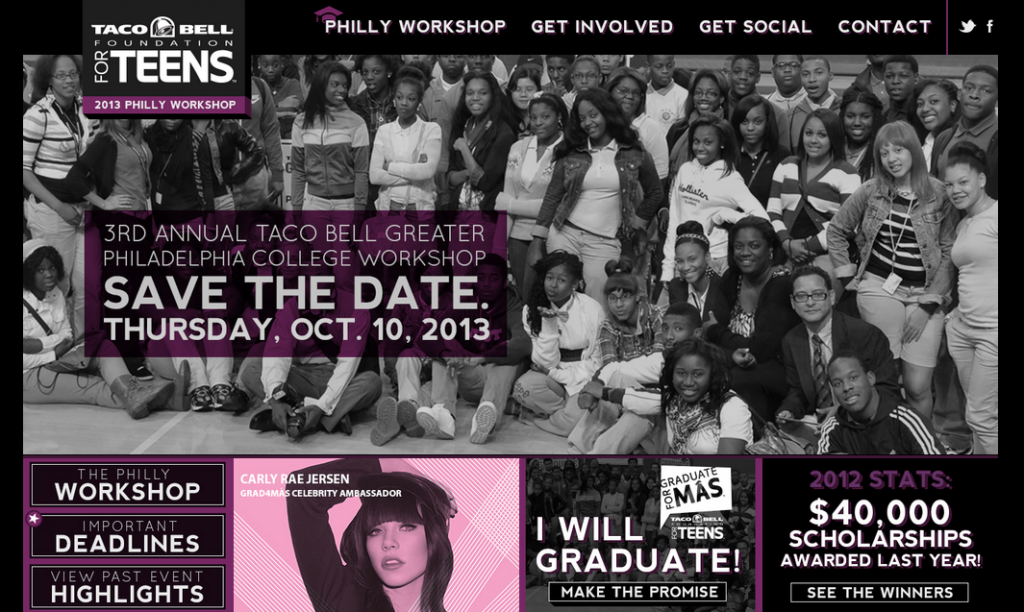 The homepage pulled tweets using the national #grad4mas and local #tbphillyworkshop into a social stream, and featured an interactive calendar of important dates and deadlines. The new website also hosted registration forms for students, high school counselors and higher education exhibitors, streamlining the process for everyone. 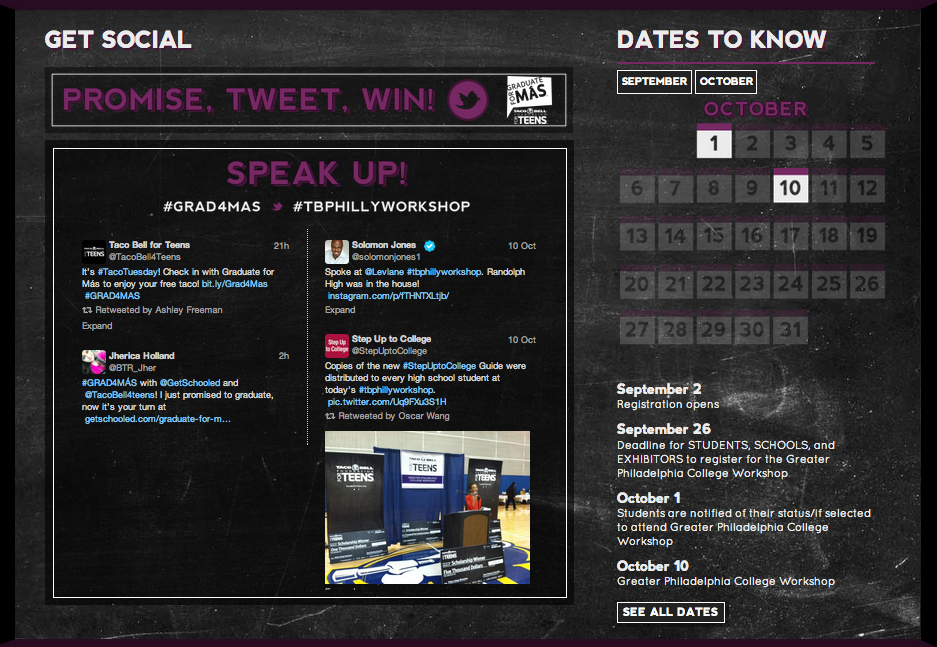 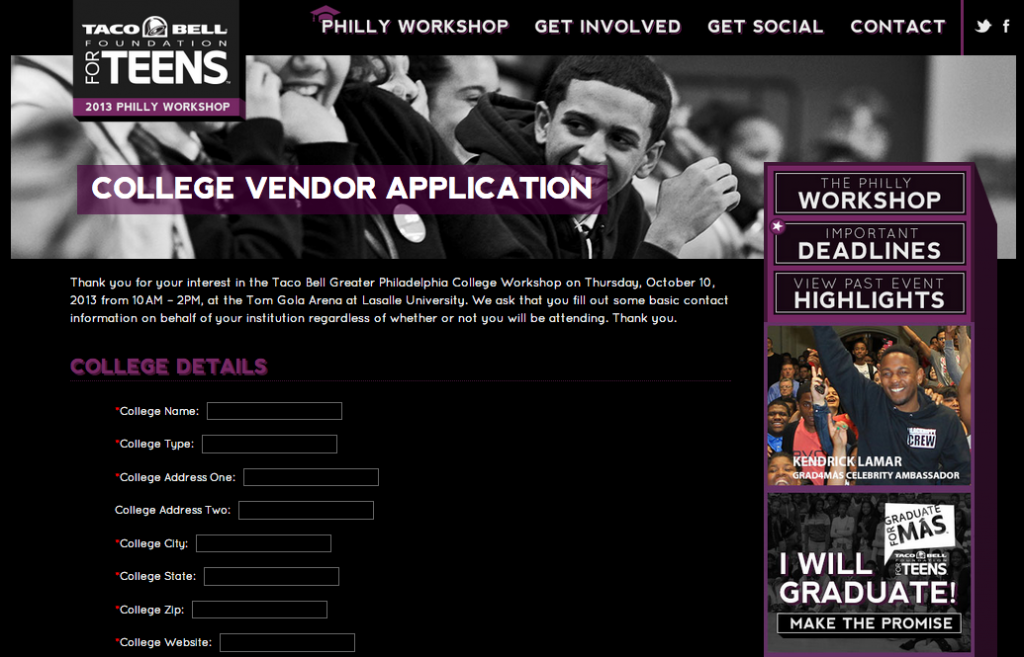 After the website was up an running, our PR department and Account Managers planned the 2013 Taco Bell Greater Philadelphia College Workshop from start to finish, meaning we invited thousands of high school students, secured 50 college exhibitors, selected Solomon Jones as the keynote speaker, booked the West Powelton Steppers as workshop entertainment, invited Mayor Nutter to attend and address the student attendees, planned the workshop sessions with the Philadelphia Futures, and provided day-of event management, just to name a few.

The LevLane team worked with PHS to create three beautiful and robust sites, dedicated to providing information on Gardening, Greening, and Learning.

Check out the new Social Stream. It’s way cool. This is just another step in our quest to bring our clients social assets closer to their web home. PHS has totally done away with a traditional Press Room and replaced it with a pure social media stream, pulled from their blog, Facebook, Twitter, Pinterest, YouTube and Flickr feeds. Stay tuned, we feel this may be a growing trend.

Hats off the Digital Team.

Check out this great story from 6ABC’s Action News Team about our client, Jomar! We recently helped the local discount chain with a brand makeover, but you can still find the same great deals in-store. The Action News story will tell you about some of the wonderful treasures you can find at Jomar. The chain is now connecting with customers in fun, new ways. Check out Jomar online and visit the store’s Facebook Page and Twitter Handle.

The next big app you already have …that is of you have a Android or iDevice.

We all know about google Maps for driving directions, but it amazes me how little people know about the little “Transit” button through which SEPTA intergrates with Google Maps, either through the native App or by simply visiting this URL in your phone’s browser: .

No, SEPTA isn’t the only transit system in the country who’s schedule has been tapped by Google Maps and quite frankly it’s not all that new, but it amazes me how many people who have smart phones and don’t even know it’s there. As a Philly native born and raised on SEPTA (35+ years of travel), this schedule in my pocket is a blessing.

Back In The Day
As I said, I was raised on buses, trolleys and on both the blue and orange lines. I’ve crisscrossed this city using various forms of public transportation, West to North, North to Yeadon, Germantown to Center City, Center City to the Airport, Germantown to Nice town, West Philly to Ambler, etc. So, I’m well aware of the inherent anxiety that comes with the fear of not knowing when or where the next bus will arrive. Not to mention being scared to death to take a “highly recommended”, “alternate” or “faster route”.

This little app would have saved my feet plenty of wasted miles walking, after incorrectly guessing what time the dreaded last “C” bus arrived, headed to Broad and Olney from Elkins Park .

Here are 6 reasons to at least try it:

Conclusion
Stop being a punk. Try it, you may like it.

Conclusion: Just fast and different enough to stay ahead of the pack, but far from the hype of the expected iPhone 5.

THE PLAY TO THE MIDDLE: The Big News News No One Is Talking About.

This play to the middle market is brilliant, even if not obvious. If you have Apple stock, hold on, to it this will be a great year. iPhone sales will far eclipse this years sales. RIM is dead and Android will become the current day RIM.


WHY I, AND MOST IPHONE 4 OWNERS WON’T SWITCH …just yet.

It’s not GREAT enough.Because, the iPhone 4 I have, is great enough…for now.

Because, its the software stupid. – With all the new toys that are about to launch on the 15th, My iPhone 4 will feel like a brand new phone.

There WILL be a iPhone 5 in 2012 and we top tier users will be there lining up to buy it. Until then, we will wait.